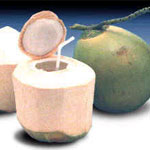 
Young coconut water (“tender coconut water” or “young coconut juice”) has long been known among Thai and Southeast Asian people, as well as Hawaiians. Nowadays, however, coconut water consumption is increasing worldwide and represents one of the fastest growing beverage categories due to its natural hydrating qualities, enhanced taste, functional health properties and nutritional benefits.

As for the health benefits of young coconut water, most research studies are of animals, with a few in vitro studies and clinical studies as follows:

Can young coconut water be used to replenish the hormone levels in postmenopausal women?

Young coconut water contains a group of phytohormones, auxin (150.6 nanomolar(nM)), gibberellins (GAs) (54.5 nM), several cytokinins (186.12 nM), and abscisic acid (ABA) (65.5 nM). According to a study of ovariectomized rats (a model system for the menopausal condition) by a group of Thai researchers, it was found that the group of ovariectomized rats given young coconut water, at 100 milliliter (mL)mL/kilogram (kg) of body weight/day showed a hormone level that was not different from the group which received the exogenous estrogen (17β-estradiol) by intraperitoneal injection, at 2.5 μg/kg/day, twice a week. From the result, it could be suggested that young coconut water had the potential of increasing the hormone levels in humans. Further studies in humans are needed. The animal group, which was given 100 mL/kg/day of young coconut water and the exogenous estrogen, by intraperitoneal injection, at 2.5 μg/kg/day, twice a week, the estrogen-like hormones in the young coconut water competed with estradiol for the estrogen receptors, resulting in the lowest hormone level in the blood when compared with other groups. Studies in humans are needed to confirm if the hormone-increasing effect of young coconut water will work the same way as in the animal studies.

Can young coconut water be consumed to supply electrolytes?

Young coconut water is rich in minerals, the inorganic ions such as potassium (290 milligram percent (mg%)), sodium (42 mg%), calcium (44 mg%), magnesium (10 mg%), phosphorus (9.2 mg%), etc. It was believed that young coconut water could be consumed to supply the electrolytes. The high potassium content in coconut water is also reported to lower the blood pressure in a human study.

Cytokinins in young coconut water are a class of phytohormones. Kinetin was the first cytokinin discovered. Kinetin showed strong anti-ageing effects on human skin cells and fruitflies (Zaprionus paravittiger). Kinetin also slowed down the ageing process, and prolonged the lifespan of fruitflies. Most importantly, the anti-ageing effects of kinetin did not increase the culture lifespan in term of maximum proliferative capacity in contrast to many other anti-ageing factors which are known to promote cancer under certain conditions. Kinetin was shown to delay the onset of several cellular and biochemical characterization associated to cellular ageing in human skin fibroblast cultures, therefore skin care products containing kinetin were later developed to treat photo-damaged skin. Furthermore, trans-zeatin, a member of cytokinin group, also exhibited anti-ageing effects on human fibroblast cells. This compound slowed the ageing process of fibroblast cells in human, as well. Further studies in humans are needed.

Can young coconut water be used in Alzheimer's disease or dementia?

Can young coconut water lower cholesterol in the blood?

A study of male albino rats fed with a cholesterol diet, young coconut water and mature coconut water, at 4 mL/100 g of body weight, lowered total cholesterol, VLDL, and LDL cholesterol (the bad cholesterols), and triglycerides, while increasing HDL cholesterol which was the good cholesterol. Lipid levels in the tissue of liver, kidney, and aorta was markedly decreased. Coconut water supplement inhibited several enzymes which involved in the increase of lipid level. Coconut water also enhanced the activity of the enzymes involved in the decrease of lipid level. An increased rate of cholesterol conversion to bile acids and neutral sterols was observed in rats fed with coconut water. Tissues of liver and aorta showed much less fatty accumulation. L-arginine content in the blood, nitrite level in the urine, and nitric oxide activity showed an increase. Nitric oxide synthase normally changes L-arginine into nitric oxide which maintains the good condition of the blood vessel lining. A study, by the same group of Thai researchers, of male rats fed a fat-cholesterol enriched diet for 45 days, it was found that coconut water lowered the levels of the bad cholesterols and triglycerides similar to lovastatin , a lipid lowering drug (at 0.1 g/100 g diet).

Another study of ovariectomized rats found that young coconut water fed at 100 mL/kg body weight for 4 weeks, resulted in an increase in HDL cholesterol, but no changes in total cholesterol, LDL cholesterol or triglycerides.

The compounds that might be responsible for the lowering of plasma lipids included the free amino acid, L-arginine, vitamin C, and minerals such as calcium, magnesium, and potassium. Among these compounds, L-arginine might play a major role; young coconut (aged at 6 months) and mature coconut (10 months) contained 30 mg% and 150 mg%, respectively. From this, it could be interpreted that mature coconut water might have a stronger lowering activity, regarding the lipid level in the blood. L-arginine had been reported to significantly lower the lipid level and reduce atherosclerosis by increasing the function of nitric oxide. Other compounds which might involve in the lipid lowering effects include phytosterols such as stigmasterol, campesterol and β-sitosterol.

In conclusion, according to the animal studies, young coconut water increased the good cholesterol (HDL) both in male rats and female ovariectomized rats. But the lowering effects of the bad cholesterol and triglyceride were shown in the male rats only. Studies in humans are needed in the future to confirm this.

Androgens, the male hormones, play an important role in building the skeleton, preventing bone loss and osteoporosis in ageing men. In elderly men, bone mass has been related to estrogen levels rather than to testosterone. Estrogen replacement therapy has, therefore, been proposed to prevent bone loss in males as well as females. But estrogen supplement has been implicated as a risk factor for an enlarged prostate gland and prostate cancer. In a study for possible beneficial effects of young coconut water in delaying osteoporosis, using a male rat model; mandibular condylar cartilage was used as the osteoporotic model. It was found that total cartilage was thickest in the control group (intact prostate) given 100 mL/kg/day of young coconut water, orally for 14 days. Another similar study, by the same group of researchers, showed that young coconut water, at 100 mL/kg for 14 days, resulted in increasing the thickness of the mandibular cancellous bone (lower jaw porous bone) in the intact prostate group and the orchidectomized rats. Studies in humans are needed in order to prove if young coconut water would be able to slow the osteoporosis in ageing men.

Another study showed that when young coconut water was given to ovariectomized rats, at 10 mL/kg body weight/day for 6 weeks. The bone mineral density of the left femur was significantly higher and the bone formation rate was higher than other groups, as well. The result suggested that young coconut water supplementation has a positive effect on bone metabolism and thus represents a possible intervention to slow the bone loss observed following menopause. Studies in humans are needed in the future.

Does young coconut water have any detrimental effect on liver and kidney ?

Histopathological studies of liver in an earlier study showed that young coconut water possessed the hepatoprotective effect; the liver did not show any fatty infiltration or necrosis as observed in carbon tetrachloride-intoxicated rats. Studies in humans are still needed to ensure the safety of young coconut water when consumed over long periods of time and its effect on the liver and kidney functions.

In conclusion, according to the information on the content and the results of animal studies and studies of cell lines, several beneficial activities from consumption of young coconut water have been reported. These include mineral and phytohormone supplementation, cardioprotection, anti-ageing, and preventing/inhibiting the progress of Alzheimer's disease and dementia, etc. However, studies in humans are still needed to confirm these beneficial activities in animal studies and to obtain the safe and effective daily dose for humans.